The following is a one of four write-ups on the four songs (‘Fast Lane’, ‘Hopscotch’, ‘Fresh Escaped’, and ‘Tear this Temple Down) former members of the band Omnibol (for which, Saki was the guitarist and contributing composer) collaborated on for Saki’s posthumous album, ‘Theodosius.’ Saki died of a fentanyl overdose in the fall of 2016.

What's the song about?

For any song, it's not always apparent, even to its author. But in part, the song 'Fresh Escaped' is about our reaction to a wound.

What is our reaction? Whether it be from the insult inflicted on us by something as inconsequential as an obdurate footstool that insisted in getting in front of a toe or something much more dire, like a life-threatening injury sustained in the lightening-strike of a car accident, the staggering diagnosis of serious disease, transgressive abuse, or less corporally, some jolting emotional trauma like the abrupt end to a relationship or death of someone we love, how do we react?

Our response to an injury may play out over a matter of seconds, days or years. The injury may be to body or soul. Whatever the case, the profiles of our reaction to each bear striking similarities and then some curious attributes.

If we are lucky, we will not sustain an extraordinary, disfiguring injury or be tested in some exceptional emotional crucible, but most of us acknowledge, however apprehensively, that no matter how determinedly we might try to live unscathed, we’ll encounter some pedestrian version of one or the other as we're poked forward towards that mortal mist. And although we’re not as good at articulating and being present for it as perhaps would benefit us, we can recognize the broad outlines of a pain response when it happens, especially when the misfortune is happening, not to ourself, but someone else.

Few will find themself in a pitched battle, but we've seen the situation portrayed convincingly enough on film. I'm thinking of a movie like 'Saving Private Ryan' where a typical response to injury is conveyed most bluntly: the soldier, upon his landing on the beaches of Normandy, promptly has his arm blown off. What's his first reaction? Well, certainly there’s physical reaction - mortal shock. But does he call out for assistance? Does he take steps of immediate self-care, either physical or emotional? No. He picks up his arm, turns around and walks dumbly on as if he's just dropped his keys.

And off camera, the punchline: "I'm OKAY!”

Not always, but so often our first reaction to an injury is not a petition for help or an admission of vulnerability but denial. And oddly, mixed in with that response, a species of shame, self-loathing and anger - not at what wounded us but at ourselves. Even in the surprising nick of a finger on a sliver, it's there. We might curse the offending splinter, but quickly on the heels of that comes the thought, why did I do that?

Because of a family history, I have at times been visited by the usually irrational fear that an impending heart attack could happen at any moment. The slightest irregularity will sometimes send me into a full-fledged panic attack. What's one of the major thoughts racing through my mind when that happens? Not that I should let someone know but how stupid I'll look if I do and how silly it will look if I am actually sprawled across the floor in full cardiac arrest. Fear of pain and death is there but its secondary. In that moment I'll do everything I can to pretend that there is absolutely not a breath-stealing terror racing through my mind and body, despite the fact that my nervous system is responding in full flight mode.

Tungsten Alley in the Downtown Eastside of Vancouver, Canada by Austin Andrews

It is a first-stage defense mechanism. If your life is truly in mortal danger, one last thing you can try is to feign strength. Perfectly reasonable. But the posture quickly becomes outmoded and we humans have proven consistently unable to relinquish it when it has. In fact, we'll go through whole chapters of our life projecting this impermeable stance, if it means we can avoid actually having to acknowledge we are hurt.

We castigate ourselves when, by the time we knew someone we cared for was in trouble, the damage was already done or they were lost entirely. It's understandable however, because it's usually when it should be most obvious to the person suffering that they are in dire need of support or of sharing the burden of a great grief that they are at the pinnacle of hubris. With concern, their loved ones watch as they strut out on the tightrope and, in an act of rebellion, upon realizing their shoelaces are untied, they display their bravado ever more insistently, deny their vulnerability and need for help ever more defiantly, all while their ability to climb back down from their isolated peak feels seemingly ever more impossible.

How did 'Fresh Escaped' come about?

What producer Jeff Van Dyck got from Saki Kaskamanidas' files was a series of compact musical movements that were centered around a melodic phrase played out on Saki’s guitar. The phrase is based upon the line, “sending out an S.O.S.” from the song, ‘Message in a Bottle’ by Gordon Sumner (a.k.a., ‘Sting’) of The Police. Saki had taken that phrase and drawn it out by changing it from a 4/4 to 6/4 time signature. We don’t know, but I’ll bet that it was instinct rather than some conscious attempt at clever composing. But it imbued it with a plaintive sense of longing and isolation.

What happened after that, is what can make collaborative songwriting so exciting. Jeff took those musical components and banged them together into a new iteration of a macro structure. That sounds rather unromantic, but often that’s what songwriting is like. Even the great muse Tom Waits, admitted that it’s often like that - moving stuff around to see what works. Picking up one part, seeing if threads on then dropping it and switching it out for something else that might meld together. In that way, you could say, song writers are not much more than a bunch of Dr. Frankenstein(s) with some instruments and a D.A.W. 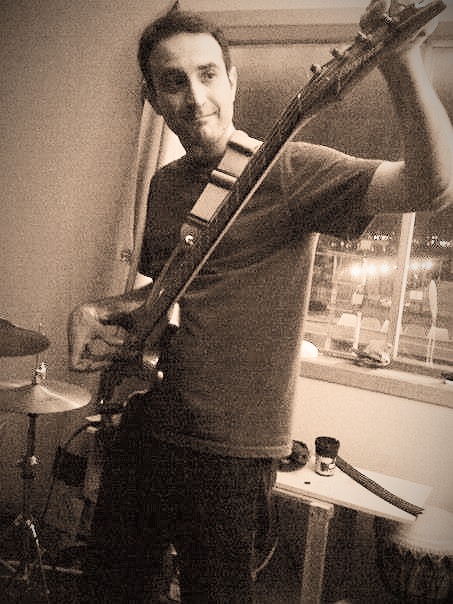 It hung together, but from Jeff’s previous discussions with Saki when he was still with us, he remembered Saki feeling that many of his songs could benefit with voice and lyric. I was lucky enough when Jeff approached me. I did the same thing Jeff did - moved stuff up and down and in and out until something began to take shape confined only by the material that Saki had given us. My approach was slightly different however, because now I needed to support lyric and melody with a narrative from those aforementioned musical components. And so, after more 'banging stuff together’ I went back to Jeff with a new iteration and a few more after that. At the same time, I was also experimenting with lyrical themes and  melody to carry them.

As it went, it was apparent that the tune was want of another voice. But it needed to be something that spoke from a different perspective. What Jeff came up with was a beautiful, understated and lyrical keyboard passage that elevates the listener up and away over the songs geography.

And so it went, ping-ponging back and forth until we came out with a new arc to the song. Soon after, bass player Robin Steen joined in, playing bass according to the original line Saki had composed but with his own signature flourish. With the lyrics and melody settling in, I was able to experiment with and then add vocal harmonies. But it was all based on those initial musical components that came out of Saki, in a moment of inspiration almost certainly one late night in his studio. And all that based on that awesome song by Sumner. From Sting, to Saki, then on to Jeff and I and out of it a totally new piece of music. That’s pretty cool! Isn’t that cool?! I think it’s cool.

Alright, so finally, you might be asking, do we now have song writing credits with Sumner (aka Sting!) on ‘Fresh Escaped’ and was it Sumner who actually gave it the thumbs up or down?! To that first question, yes! That’s pretty neat. To the second question, we don’t know. But Jeff and I are pretty confident that earlier this summer, Sting was in one of his castles on a loch, somewhere in the Highlands of Scotland, blasting the song through his million-dollar Kharma Grand speakers and, whilst executing the classic Jivamukti Yogic move, 'Hero's Pose,' the decision went down:

But then, there's a small chance it could have been the intern. And that's....this guy:

(linked to Spotify, but feel free to use your streaming platform of choice)

You’re just a hairball scrawled across a page

I can see you’re off a loose leash

Watching the clocks wind down

Till then there’s no one to tie you down

Is it high? Is it bittersweet?

There’s no one you have to please

You’re just a poppy with a peacock

You’re just a tear stain stroke across a face

You do your best to feign a cool walk

Scruffing it through the dust

Speaking in a furtive hush

Down through plaza grounds

But you’re willing you won’t be found

When did it come so low?

When were you so alone?

You’re running but you run too far!

You’re running but you don’t know where

You’re running but you ran too far!

You run too far

Well you run too far

Well you run too far

And now you’re sending out an S.O.S